History of Bridal Garters
One of The Oldest Wedding Tradition

Bridal garters are one of the oldest wedding traditions and still a significant part of bridal attire, they were thought to bring luck and fortune. There are two theories.

Dates back to England in the 14th Century it was believed to bring good luck to anyone who could obtain a piece of the bridal attire worn by the bride on her wedding day. The brides dress was literally torn away to the displeasure of both the bride and groom.

To keep themselves and their garments intact the bride and groom began to throw the bridal garter at the guests. When this tradition became popular the male guests would become quite aggressive and roudy, they would attempt to remove the garter themselves. This is when is became customary for the groom to remove the garter from the bride's leg himself and then toss it to the bachelors.

Proof was needed for the bride and groom to consummate their marriage in front of witnesses. Family and friends would come into the bedroom to testify the consummation. The eyewitnesses would obtain the garter as proof of the consummation.

The onlookers all waited in anticipation to snatch at the newly weds and try get their hands on the brides undergarments, as it was considered good luck to have a piece of the underwear worn by the bride.


As the couple did not appreciate this, it became a tradition that the groom would throw the brides garter at the crowd so they could not obtain it themselves. This tradition became popular and has somewhat been modified from the bedroom to the wedding reception. 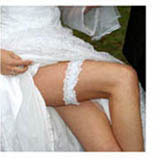 The tradition nowadays is for the bride to wear two gartersif she is to engage in this ritual. A special garter to enjoy as a keepsake and a less expensive one to be tossed by the groom.

The groom would remove the bride's garter from her leg, then toss it over one shoulder to the bachelors, the man who captures the garter is the next to marry and in some customs slips it on the leg of the unmarried woman who caught the bridal bouquet.


One of the bridal garters is kept as a family heirloom, then borrowed from other newly weds to bring goodluck to their marriage. Due to an old Victorian rhyme, it is traditional for many brides to wear "something borrowed, something blue" on their wedding day. The borrowed item signifies the transfer of happiness from a happily married woman to a new bride, while the blue item symbolizes purity and fidelity.


Tossing of the garter is part of many traditional wedding celebrations and is an act of the wedding festivities. However, some couples choose not to have this ritual as part of their celebration.