What do all the engagement proposal ideas have in common? They have a common goal – to be accepted and safely and happily married. End of search. Everybody's happy, right? And the greatest minds in all history have pondered on romantic ways to get engaged. Einstein developed his theory of relativity waiting for an answer to his marriage proposal. Shakespeare wrote Romeo and Juliet while plotting the perfect proposal.

Genghis Khan, it is said, swept through Asia in search of the perfect wedding proposal. With hundreds of wives and concubines, he had to. After all, 'marry me or I'll destroy your city!' gets lame after a while. The good news is that wedding proposal ideas don't have to break the bank.

In fact for many young ladies, romantic wedding proposals don't have to be unique or done in exotic locations, they only have to be memorable and make them feel like they are really wanted and valued. Of course, this goes to demonstrate why Ghengis Khan conquered half the world instead. 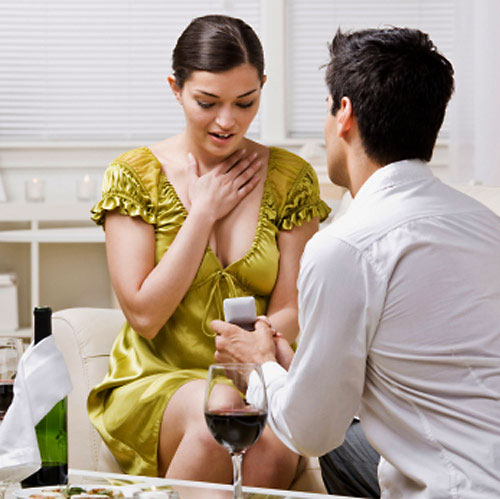 This one is simplicity itself. All you need is night, a box of small tea light candles and a little help from an accomplice – while you take your good lady by the hand and lead her into the darkness, the sight of the candle trail or lanterns will at first inspire curiosity and wonder as you walk the candle trail. Hidden from view, the candle trail comes to a table with a lovely dinner, champagne in bucket and a host of candles. Musical accompaniment would be an added bonus. A trusted accomplice to organise the food, drinks and candles etc would also have to be a shoe-in for the post of Best Man. You can however do it all yourself without anyones help, just organise battery operated paper lanterns and turn them on in advance, make sure to prepare some starter meals like a mezza plate for two and exotic breads for the dips. You may also want to perfectly time some dinner in the oven, so that everything flows smoothly.

A wedding proposal at a fancy restaurant is one of the easiest to organise. Organise earlier with the maitre de, to have complimentary wine or desert brought to the table - with the ring. After the beautiful dinner and shared words of love, the proposal is a natural progression.

3a. The Christmas Present Proposal

As wedding proposal stories go, this one will entertain your children and grandchildren for years to come, as well as give your wife bragging rights of the day her true love gave her a Tiffany engagement ring and became her fiance. When she opens her Christmas present and turns to her young man, he proposes marriage and a Tiffany Blue themed wedding.

3b. The Santa Claus Proposal

The Santa Claus proposal is

a little similar in theme to the previous one, but the Father Christmas costumes and tradition of girls sitting on Santa's knee and asking for a present is priceless. When the intended has truly convinced Santa that she has been a good girl all year, then she can have her ring.

4. The Tandem Parachute or Parasailing Proposal

Timing is important with this one. If you've opted for parachuting, the proposal has to come after the chute opens, otherwise the authenticity of the acceptance comes into question, not to mention the weirdness of waiting until she answers before pulling the ripcord.

The skywriter marriage proposal is one for those whose fear of heights preclude them from the parachute proposal. Skywriting won't be cheap, but it will be memorable.

This is a low production marriage proposal idea. It's central plank is to scare the daylights out of the girl and then finish her off with a marriage proposal and ring. Things could go ugly if she has a weak stomach. Her answer could be more than you bargained for. On the other hand research shows that people get more romantic after their senses are heightened with adrenalin.

For those romantic fools who love poetry, what could be better than beautiful wedding proposal poems. Whether you opt for a Shakespearean sonnet - or even better - a self composed one engraved on a metal plate, it will mark this as one of the unique wedding proposals.


8. The Weekend Away Marriage Proposal

There are so many opportunities for the romantic wedding proposal in a holiday resort or mystery weekend away. It will be comparitively easy to get the hotel staff to help you prepare a marriage proposal card, message in a bottle or note for the young lady to find.

For those take-charge women, tired of waiting for the eventual marriage proposal, or for those just plain impatient ladies, you don't have to wait for an eclipse or a seven year courtship. By all means take the bull by the horn, but let the young bull know that all pleasant sensations will continue for ever. Thus the wedding proposal should come after a particularly fantastic night of whatever he finds most pleasing. Game over.

Okay, okay, I know some people will cringe in horror at the prospect of a marriage proposal in front of 80,000 people, but yes, it is highly irregular. A word of caution: only do this if you are 100% certain of the outcome, otherwise it will be a long and lonely walk to the car park. The crowd should not be relied on to gang up on the girl, but simply to cheer an already done deal.

Everybody likes to read about heartwarming unique romantic proposals, don't they? The world needs a little more romance. And doesn't everyone have a story to tell. Absolutely! Why not share your romantic wedding proposals with the Perfect Wedding Day community? After all, the more engagement proposal ideas out there, the better.

Send us your romantic proposal ideas or share your own beautiful story and we'll post it up here on our site.

Click on the links below to see more ideas or real life stories of romantic proposals, contributed by other visitors to this page.

'Ring'ing in The New Year
a) A little bit about both of us : Jason Mohan-Daryanani = Born in London - He is a songwriter, Producer, Music video director and filmmaker in Los …

Glacier Marriage Proposal
I am stationed in alaska and I flew my girlfriend up for Christmas. I took her on a plane ride that landed on a remote glacier. We got out of the plane …

Message In A Bottle
I bought a heart shaped bottle from www.timelessmessage.com with a customized message in the bottle. I bought a very small wooden box and put a lock on …

The 'Spoiled The Surprise' Cruise Proposal
Weeks before we set sail, he spoiled the surprise by telling me I was going to get engaged during the cruise (HUGE mistake). The vacation finally …

The Kid Marriage Proposal
Take your kids to the beach and as she is playing and enjoying her time with the children pull the oldest to the side and let him/her ask for you. Mommy …

The Lake Proposal
One summer my boyfriend and I were both camp counselors at camps that were just down the road from each other. It was already half way through the summer …

The skiddoing Proposal
My boyfriend and I where skidooing on a weekend with the kids all day. Before supper, we went off on a ride by ourselves leaving the little one behind …

The Mirror Proposal
My boyfriend and I used to write messages to each other on the bathroom mirror after we took a shower, so when the other took a shower the steam would …

Engagement Proposal in a Hot Air Balloon
I was trying to come up with a very memorable engagement proposal idea as my brothers all had really cool ones and I really needed to bring my "A" game. …

Fortune Cookie Marriage Proposal
Book a romantic evening at the best Chinese restaurant in town. And get really dressed up. Ask to be seated at a table with a great view. You want to appeal …