'Ring'ing in The New Year 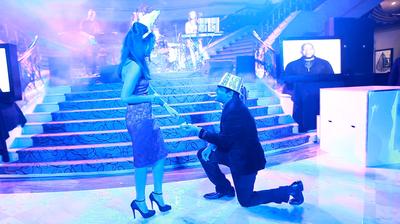 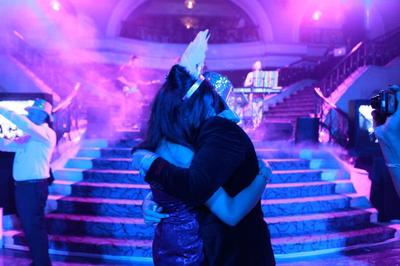 a) A little bit about both of us :


Jason Mohan-Daryanani = Born in London - He is a songwriter, Producer, Music video director and filmmaker in Los Angeles. He is better known by his stage name Jay Mo.

Anjali Mirpuri = Born in Liberia - She did her bachelors degree from Singapore and a Masters graduate in Finance from the UK. Currently working as a Finance Manager in Ghana.

Despite being born in different continents, we were both brought up and raised in Ghana - Africa. Childhood friends turned into lovers. We started dating in 2007 unofficially, but made it official in 2008. However due to our different careers and ambitions in life. We've had a five year long distance relationship. But made it a point to meet 3-4 times a year either in Ghana or we would plan a holiday escape. We've pretty much been all around the world together in the past 5 years. What can I say? INTERNATIONAL LOVE ! :)

c)How and When we got engaged:

We decided to celebrate 2012/2013 new years in Dubai that year. He proposed 30 minutes to midnight.

Please find attached our proposal story and few pics from the Proposal.

Below is a video of our proposal:
http://www.youtube.com/watch?v=EVUgci0s9NU


We plan on having our Indian Engagement Ceremony in London this June 2013 and Wedding is scheduled for December 2014, Venue yet to be finalized.

There are many times throughout the year that can be marked as the perfect day for proposing. But honestly, nothing can be compared to the magic surrounding a New Year’s Eve proposal.
Anjali and I were dating for just over four years, Although we got to a point in our relationship where we talked and joked about marriage quite a lot, and I would always tell her “Baby you know I will eventually propose BUT when the times right”, Little did she know.

Jason took me to a beautiful Chinese restaurant for lunch that day and later we decided to go for a stroll down Jumeirah beach to enjoy the view of Burj Al arab at sunset. It was so romantic and beautiful; we took loads of pictures and just enjoyed the moment.My Family had Invited Jason to spend New Year’s Eve dinner with us at the Movenpick hotel in Dubai that night. So we headed off back to our hotels to get bejeweled and bedazzled for the night.

I knew this was the right time and place to pop the question:
1) The transition from one year to another was an excellent backdrop to symbolize the growth of our 4 year long relationship from boyfriend/girlfriend to fiancés.
2) Anjaliwon’t admit this but I know she wanted to feel and look like a rock star-princess combo when I propose.so what better moment to make her feel even more special. Plus when someone snaps that inevitable picture of her saying “YES”, she would love the pictures because she already planned to look amazing that night.
3) I’ll never be able to forget our Proposal-Versary…LOL. Yes, Men and remembering dates.

Jason Arrived slightly earlier than dinner and said he wasn’t feeling too good after the Chinese lunch we had that afternoon, which I found very odd to hear from him because he went on and on about how good the food was while we were walking by the beach. Anyway, so at Dinner, he kept leaving the table every 10 minutes to “visit the restroom” and kept on texting people which I found very annoying and told him to stop being an anti-social in front of my family LOL

I was trying to coordinate with my undercover photographer, secret videographer, the hotel management,etc through text messages and my regular “visits to the restroom”. Anjali was getting quite restless at some point in time, I could tell.So I sorted everything out and then went back to the table to spend some time with her. Even though she kept forcing me to eat/drink…my mind was at a million places at a time. Will the announcement be made loud and clear? Will the photographer capture the moment in time without her seeing him? Food was the last thing on my mind FOR A CHANGE! LOL

All of a sudden out of nowhere ,11:40pm the lady on stage called our names “ can we have Jason Daryanani and Anjali Mirpuri on stage please”.I was so confused and had no idea what was going on. Jason whispered in my ears sayingit’s just a song I dedicated to dance with you. So we head towards the dance floor and suddenly everyone around us parts into a big arc. Leaving us both right in the center.My heart was pumping so hard, I felt like I was going to faint!

The Lady then makes another announcement “I heard it’s someone’s birthday today?” and she looks and winks at us. Clearly it wasn’t any of our birthdays that day, leaving me not only confused but now I was absolutely BLANK.

She then announced “Oh wait a minute, it’s not your birthday.There’s a note from Jason to Anjali which says ‘THANK YOU FOR WAITING FOUR YEARS FOR ME *pause* WILL YOU MARRY ME?’ ”

Shocked, I turned around to Jason, I couldn't breathe, I couldn't believe what was happening. He took a box out of his Jacket, kneeling down on one knee, holding the ring box open.I couldn't stop the tears of joy from running down my face;I didn’t even get to see the ring, just the image of him on his knee looking into my eyes, waiting for me to say something!My stomach started flipping and tears pooled in my eyes.After all our years together and the number of ways I imagined him proposing to me I was so nervous that I could barely get out “OFCOURSE I’LL MARRY YOU”.

I remember there was a time Anjali and I joked about if the proposaldidn’t surprise her, she would say NO! Of course she wouldn’t say no, but waiting down on my knee at that moment, looking at her face with tears rolling down her eyes,waiting for her to say something got me a bit nervous and shaking LOL. The Lady then announced “Is that a yes?”with tears of joy in her eyes and a big tight hug; she nodded assuredly….SHE SAID YES!!!

It was without a doubt the most elated and euphoric moment of my life. I will never forget the way I felt at that moment. It's funny that although I was expecting, in some way, a proposal at some point of our relationship, I was still so extremely surprised when he did it. Nothing could have prepared me for the actual day of the proposal. The whole thing was just so shocking and so unbelievable. I felt overwhelmed, I felt sky high. It was the most perfect proposal; most importantly he had my father’s blessings and informed my younger brother 30 minutes before the proposal of his intentions. I just couldn’t have wished for a better proposal and I love sharing this wonderful story.