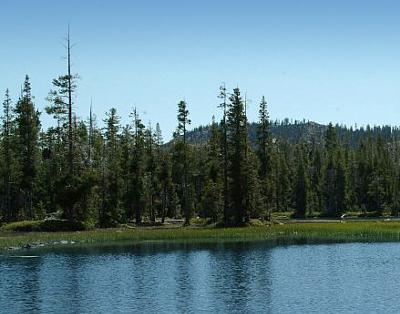 One summer my boyfriend and I were both camp counselors at camps that were just down the road from each other. It was already half way through the summer and my boyfriend had called me on a friday asking if I would like to have a special date that night since we had our time off for the week. I said yes. He told me that someone would come pick me up for our date at 8:30 sharp and to be ready. I spent the rest of the afternoon getting ready and finally went out to meet my friend Drew who was to escort me over to the boys camp down the road where the date would take place.


Finally we arrived, and you could see the old fishing bridge over the lake had candles all over the place. I walked holding Drew's arm as he escorted me towards the bridge where I saw my boyfriend. I ran up and gave him a hug. Then, I took a look at everything that was on the bridge, there was a table with flowers and plates and more candles. He led me over and held my chair out for me. We sat together eating dinner that one of our dear friends had cooked for us, spaghetti and meat balls. While we were eating our meal we enjoyed some entertainment. First, our friend Matthew had written a poem about us:

After the poem we continued to eat our food and enjoyed more entertainment. Two of our friends, Drew and Brandon had written a song about us and sang it to the tune of Bella Noche from Lady and the Tramp.

After the song, another one of our friends came with an easel and sharpies in hand to draw a picture of us.

After we had enjoyed our entertainment and finished eating dinner it was time for dessert. We got into a row boat and were being rowed around the lake by Drew and Brandon, our master rowers. We ate ice cream together and admired the beautiful lake, the moon, and listened to people on the shore playing guitar and singing "Come Fly With Me", by Frank Sinatra.

A little back story – I had told Thomas (my boyfriend) that I thought it would be cute if a guy proposed to his girlfriend while they were eating ice cream and she found the ring at the bottom of the bowl, and by that time it had been almost four years since I had told him that. He remembered!)

When we were eating our ice cream I was already nervous and anxious about what was going on, so I handed it to him saying I couldn't eat any more. He looked at me with a confused face, and then to my surprise he dug his fingers down into the ice cream, pulled out a little baggy, and then pulled out a ring. He asked me to marry him on his knee, in the boat. (He accidentally kneeled down into some ice cream!) Of course, I said yes, and suddenly fireworks started going off into the sky! Big fireworks, all sorts of beautiful colors!

Later after we were rowed back to shore, we drove back over to the girls camp where I worked to our engagement party with all of our friends.

What a memorable evening!

Join in and write your own page! It's easy to do. How? Simply click here to return to More Great Romantic Proposals.